Hey guys, this is Anthony with Vonk Digital. Today I just wanted to talk to you a little bit about branding. But to do so, I want to tell you a little story about my past. When I was a young kid, my first hero was Superman. Here’s a picture of Vinnie and I, from when we were young. I don’t know if you can see that in our capes and full Superman outfits. I don’t know what we’re looking at, but you can tell from a very young age, I had an affinity for Superman.

When I’m thinking about branding, Superman really was one of the best branders out there. I mean, just picture this. He’s a guy who drops in unannounced to people he’s never met in person before, wearing a full spandex suit and a cape. People are excited to see him. They’re thankful that he’s there. They’re happy that he’s there. And again, this is before he’s ever actually… He’s never even met these people in person. So you’ve got to ask yourself, “How is this possible?”

Well, first of all, he’s building trust through his actions. Testimonials and reviews are what we would use today, but it’s the same thing. He’s always wearing that same suit and outfit with the big ‘S’ on the front, big ‘S’ on the back on the cape. That’s his branding so he’s easily recognizable. He tells a story which inevitably builds trust. He talks about where he’s from. He talks about what his goals are for peace on planet earth or whatever else his messages are.

Now, he did that a little different. His platform was different. What he would do, if you remember from the movies, if you saw any of the old Christopher Reeve movies, he would drop in at these outdoor press conferences and talk to the crowd. And the Daily Planet, which was the newspaper, would film him. I mean, would write articles about him, take pictures.

So that was his platform at the time to get his message out there. That would be considered, if you’re familiar with some of the ways we look at the market at Vonk Digital, that would be more the old way.

The new way is kind of how we do it as modern mortgage professionals and in the new world online. We leverage the internet, our social channels, and then we curate all our information on a website that’s specific to us. That’s, obviously, where we come in.

So the last thing I’ll say about Superman is he really did a great job differentiating himself. He wasn’t just doing the exact same thing as everybody else, and that allowed him to shine. So that’s something to think about. But the real message here is, let’s all go create some content and get credit for the hard work and our expertise, even when we’re not physically there.

I think that’s key, is the effort upfront to creating content, creating video content, having a place to curate it and having a message that you control and you can present to potential prospects or referral partners. It’s just so important.

So if you want to learn more about how Vonk Digital could fit into your marketing and lead gen strategy moving into the future, somewhere here, I don’t know if it’s below, there’ll be a button where you can click to either learn more or reach out and do a demo with us.

Thank you. I hope this was helpful, and good luck out there.

Dig the Well Before You Are Thirsty

The advice and education-based loan originator

As the mortgage industry becomes more efficient, some are concerned that the loan originator position… 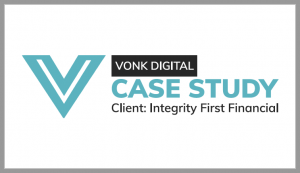 Categories
Website Proudly Powered By Vonk Digital
Back To Top